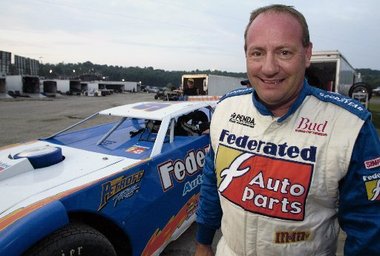 Kenny Schrader Ready to Go Back to His Roots with LOSC

Durham, Ontario – Thursday, March 28th 2019 Full Throttle Motor Speedway announced that NASCAR personality Kenny Schrader is scheduled to make his debut appearance at the high banked 1/4 mile speedway on June 8th. Schrader will be showcasing his asphalt skills as he comes back to his short track roots to run the “BraveHeart 100” Lucas Oil Sportsman Cup race in honour of our North Wellington Special Olympic “BraveHeart” team members with some of the veterans and budding talents of LOSC.

“That’s what you started out doing, that’s what you wanted to do” Schrader commented, “I never dreamed about {NASCAR Sprint} Cup racing” Being able to go back to his roots and enjoy local short track racing after he retired, is a privilege he is honoured to have. “I raced with NASCAR close to 30 years, and once that was done I knew I didn’t want to quite racing.”

Although Schrader informed us of his love for dirt track racing, he ensured us that he very much enjoys coming to race on asphalt as well, “you think about every track as just a circle, you need to get around there as fast as you can dirt or asphalt.” Schrader then stated the excitement he receives when he is able to compete around the country. “I like experiencing new tracks over a new car” Schrader says, “I have raced at over 500 different tracks, the cars themselves are just cars, they are all the same. I am always more excited to try something new.”

With Kenny Schrader’s history in the sport and the knowledge he has from traveling the world living every racers dream, he has been able to witness first-hand the health of the sport and the things NASCAR is improving on. “It all starts with the facility” Schrader started out by saying, when you bring a big series to a track, the facility itself needs to accommodate to those running.

“There are very few short tracks that you can hold those kinds of people.” While referring to NASCARS elite series. “Many people focus on our crowd count being low; instead of 130,000 people in the stands, there are 70,000.” While the popularity of the sport being a concern the NASCAR alum brings up a compelling point.

“The main issue is there are few short tracks around that can house a NASCAR crowd of that many people.” Schrader continued, “We are fortunate enough to have some good running short tracks around, although you need to think of every short track like a restaurant, it has to be nice, clean with good service.” He added.

“Just because you have a race track, doesn’t mean you’re supposed to have a big crowd every week.” Said Schrader, “you have to do your part just like any other business. The facility itself plays a big role.” Back a couple of years ago, the short track business was a lot easier, owners would open the gates for race day and the stands were full. However in today’s society, that is just not the case.

“People are more selective now a days on where they are going to spend their entertainment hours.” Schrader added, “To get their attention, the sport as a whole needs to do a better job as expectations are a lot higher now.”

With that being said, as a series the Lucas Oil Sportsman Cup is thrilled to have Kenny Schrader join us for one of our toughest races. Gord Bennett and the Full Throttle team are putting in countless efforts to ensure that the BraveHeart 100 is an event you will not want to miss. For the full track experience, There will be 100 available tickets for “All Access VIP Package” including track swag, autograph time and a 1 hour Meet and Greet session with Ken Schrader himself. The LOSC team is very excited to be a part of such an exciting event, that you want to mark your calendars for.