Over the course of the 2018 season, the number 54 of Steve Arrand and Kevin Allen dominated the field on a weekly basis. With great competition from drivers like Stu Robinson Jr, Chad McGlynn and Kevin Gallant, it sure wasn’t easy for the London, Ontario native to accomplish what he did. “Patience, consistency and a team wide determination to win is how we got the job done, week in and week out. On top of all of that, a well maintained race car and a boat load of good luck was how our 54 machine ended up in victory lane.”

With the first race scheduled at Delaware Speedway being rained out, the LOSC series took on Full Throttle as their opening night. Tim Tolton won the race but the 54 team was not letting their return to the series end on a bad note “ ​The first race was expected to be a race of survival, and that is exactly what it was. We had a good piece but knew the #3 [of Tim Tolton] and #77 [of Alvin McNicol] would be fast. We had a good day, lead some laps and didn’t seem out of place at all, coming home with a solid 3rd was pretty much what we expected, and put us on the right track for the rest of the season.”

After the first race of the season, Steve told us that his momentum carried on from there and the team had things figured out so they could be in contention for the championship at the end of the season; “The team’s first priority was to win the championship in 2018.  Winning races is always great, but sometimes points racing means that you cannot be as aggressive as you would like to be. We have come very close to a championship win in this series in the past, but narrowly missed it due to an unforeseeable mechanical issue that ended with a DNF that took us out of the points lead.” Arrand said, “We were determined to not let that happen again, and I think with that in the back of our minds, we knew exactly what we had to do to get the job done and be there at the end of the season.”

By race five the prodigy had run upfront in every race proving to his competitors that he was not there to play around, he was determined to win. As the season was slowly coming to an end, everyone’s programs were set and aligned and the competition was stiff making for some very exciting racing. “The series has a wide variety of drivers. Some new and some old which makes for good racing from front to back, all around the track. We knew coming into the last couple of nights, the competition would shift and everyone would have their game faces on, ready to compete for the points chase.”

After a couple of weeks off, all the drivers had time to perfect their rides to get ready for the last race of the season at Flamboro Speedway. The tensions were high as the 54 team and Stu Robinson Jr we’re in a tight battle as they were 11 points away from one another in the championship points battle. Although Robinson Jr won the race, Arrand had to finish better than 9th to Clinch the championship, and he did just that. “We went into the final race with the same game plan that we employed all season long.  We knew that we didn’t need to finish P1, but that we needed a decent run.  We had to take a self- preservation approach to ensure that we didn’t get tangled up and not be in a position to finish the 100 laps. We were there at the end of the race and got the job done.”

After an incredible return to the series, Steve Arrand, Kevin Allen and their team showcased what team work really meant as they accomplished exactly what they planned to in 2018. “We are fortunate to have some of the very best guys in this sport on our team.  Every single crew member has been a short track driver in various divisions around Ontario and that brings a wealth of knowledge and expertise to our program.  They all have a meticulous attention to detail and know that you cannot win races or championships if you are not there at the end of the 100 laps.  We all work well together and have a great deal of fun doing it; even more so when we are winning, so being able to celebrate the championship with the guys after a long season of hard fought efforts, it is something none of us will ever forget.”

Closing out the 2018 season on a high, the 54 team plans to continue their championship run in 2019 [[with the help of Transport N Service Inc, Transaxle Parts Inc, Western Medical Inc, Pine Valley Minute Lube, Advantage Vinyl​, Steelhead Food Inc., Otterville Custom Carts and Norpac]] to dominate once again “We have the same crew and the same car and we will be running in the LOSC Series for 2019.  Steve Arrand and Kevin Allen will be splitting the ride once again this season.  We have a championship win under our belts, so now the focus for 2019 will be more to come out on top at every event that we attend.” 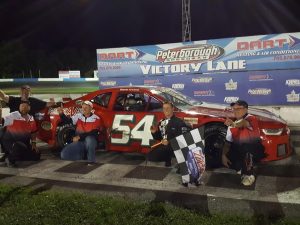 The 54 team in victory lane at Peterborough Speedway.